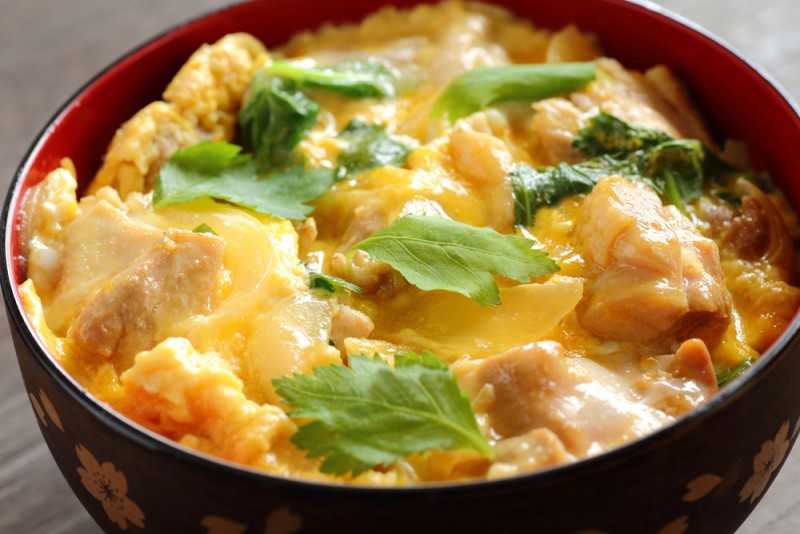 Oyako-don is one of the three most popular types of donburi that you can find at your local soba shop, including Ten-don and Katsu-don. It features chicken and onions in a fluffy cloud of eggs on top of freshly steamed rice and tastes like pure bliss. Let’s talk a little bit about Oyako-don today.

Oyako-don may seem like a traditional food dating far back in Japan’s history, but it is not actually that old of a dish. Oyako-don was first made at a restaurant called “Tamahide,” in Nihonbashiningyocho, Tokyo in Meiji 20. Tamahide specialized in a form of hot pot that used “shamo” chicken, but not wanting to be wasteful, they used the remaining ingredients mixed with egg to eat over rice as an entirely separate dish. Tamahide is popular in today’s world for its Oyako-don, and there is always a line out the door.

In Kansai, Oyako-don’s origin has different roots. When an exhibition was being held in Osaka in Meiji 36, the host restaurant “Tori Kiku” was asked to create an Osaka-esque dish that was affordable and could easily be made for foreign guests. They thought of donburi with chicken and eggs, and its wide popularity lead to its consumption in the Kansai region.

Most people think of chicken (oya; Japanese for “parent”) and eggs (ko: Japanese for “child”) as the classic ingredients in Oyako-don, but there are many different varieties, including Seafood Oyako-don made with salmon and roe. Here are some other varieties:

Tanin-don: This uses pork instead of chicken. Since this doesn’t have a parent/child match-up, it is called “Tanin”-don, which is a Japanese word meaning “of other people.” When beef is used, the dish is called “Kaika-don.”

Ki-no-ha-don (meaning “tree leaf”): Instead of chicken, this dish uses kamabako, a type of cured surimi, and it resembles the leaf of a tree.

Itoko-don (meaning “cousin”): This uses duck meat, so while it isn’t a parent/child connection, the ingredients are still “related.” This variation is popular in Kansai.

Tamago-don (meaning “egg”): This is Oyako-don without the chicken. It’s quite simple yet has a depth of flavor.   Donburi is known for being a quick, cheap, and delicious member of the Washoku family. Thus, it is also quite popular as a lunch menu item overseas. Since it is so simple, it is the dish we have our first-year students prepare on their first day of culinary class. Though it seems simple, it takes a lot of skill to manage the proper cooking temperature to prevent the chicken from getting tough while maintaining the fluffiness of the eggs. Even today, the appetizing aroma of dashi and soy sauce is in the air. Did you all do a good job today preparing your Oyako-don?