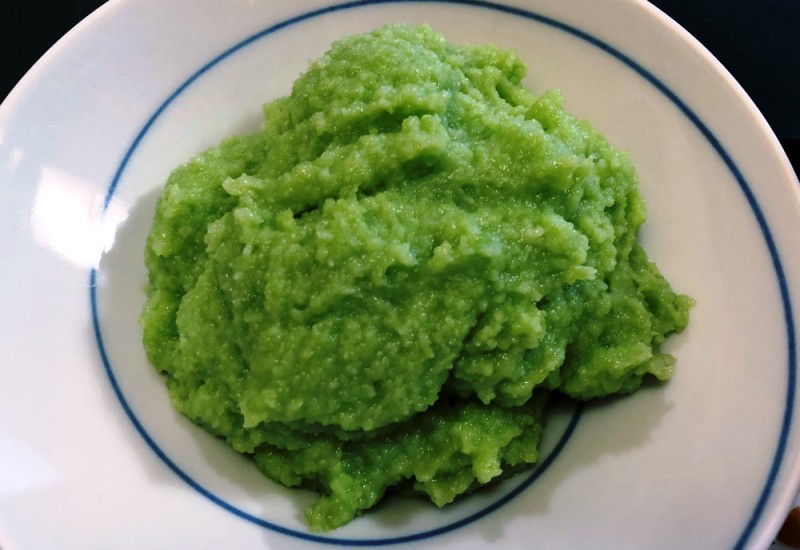 We have yet another delicious variety of mochi to talk about today.

Have you heard of Zundamochi, a type of mochi from the Tohoku region? It’s one of the three main specialties in Sendai, along with Gyutan ox tongue and Kamaboko surimi served in a bowl. As you can see in the photo, the edamame is boiled, then finely chopped and mixed with salt and sugar in a marmalade called “zunda,” that is then poured atop the mochi.

Some people say “zunda” is a play on words of the Japanese for “smash beans,” but apparently another explanation is that those of the Sendai Domain used the same swords they used in battle to slice the beans, resulting in a word that, when pronounced in the Tohoku accent, sounds like “zunda-tsumochi,” and from there “Zundamochi” was derived. What an interesting set-up.   Zundamochi is green in appearance, and the marmalade has a pleasant edamame flavor with little chunks of the crushed beans. If you are able to try this in a Sendai location, you will be amazed by how delicious the rice cake is. You can eat it cold during the wintery season, but actually, the mochi does not become hard when chilled, and actually creates a delicious flavor and enjoyable texture. It is often eaten during Obon Festival, making it Sendai’s version of another popular festival treat called “obaki.”

Within Sendai, there is the Murakamiya Mochi Shop that has been around for over 140 years, as well as the long-established Hikochi sweets shop that offer Zundamochi. The above photo shows Hikochi’s Zundamochi, which costs 500 yen per one serving. In recent years, Zundamochi has been used in in buns, daifuku, dorayaki, parfaits, ice cream, crepes, and other desserts. It’s amazing how multipurposed it is. But no matter how it is served, the best part if enjoying the pure taste of edamame. If you have a chance to visit Sendai, please try and enjoy this excellent representation of the flavor of edamame.